Welcome to the land of Fermentale! This is the second Diary about The Waycross Inn. If you don’t know what the game is… take a look at the first one!

Fairly early on in the project, I realised that I needed to design a fantasy ‘World’ in order for the story of the Waycross Inn to convincingly unfold. The game is about a tavern which unites or divides the cultures of the land it inhabits. Therefore, it’s important that these cultures are in fairly close proximity to one another.

In order for these cultures to exist, however, there has to have been a history, which would of course mean that they would have been mixing for many years before the game is set.

Finally, the land has to be small enough that you could convincingly believe that a large portion of the population need to meet in a single place. Which is your tavern. 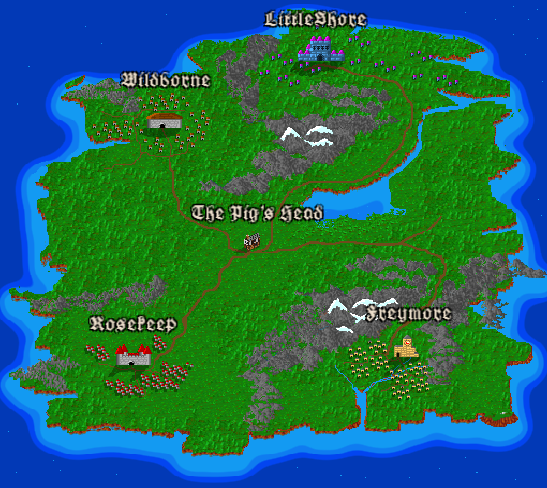 So this is how the land of Fermentale looks. Four towns at each corner of the island, and their only safe method of passage to each other involves the crossroad which connects them. In case you’re wondering, the game is called ‘The Waycross Inn, and although that is the default name of your inn, you can actually call it whatever you want. Which is why it’s called ‘The Pig’s head’ in this picture!

The history of Fermentale is based on the colonisation of the USA, but on a much smaller island. The cultures already have their own history, and have existed for many years on the main continent, but a small number of them have decided to settle here for their own reasons. The island is much smaller, and no wars of independence / civil wars have happened yet, however, the tension is brewing and it may happen in the near future. The game is set in the year 1512.

It is very important to me that there are no ‘Goodies’ and ‘Baddies’ in Fermentale. Each culture has their conflicts and flaws, however, I don’t want the player to side with any of them because they’re obviously the good guys.

The Tulle empire are the biggest culture in the world, and were the original discoverers of Fermentale. They were the first to settle there in 1134, building their first colony in the south west corner of the land, which has now become the bustling town of Rosekeep, at the center of which sits the original stone keep. The Tulle culture has spread to all of the other towns in the land, often with a little resistance.

“I was born free” – Common phrase uttered by Droma when they are sentenced for a ‘crime’.

When Fermentale was first discovered, many people of minority religions emigrated there so they could practice their faith without persecution. One of these faiths is ‘Droma’. They’re a culture with an affinity to the land and who practice rituals which some consider to be quite frightening, and often offensive. They don’t believe in being ‘ruled’ by anyone, instead favoring the notion that Fermentale should be everyone’s land.

“Hedonism sickens the spirit. It makes us less able to love.” – The beginning of a well known Croll Prayer

The Croll are a pious branch of the ‘True’ faith, and they settled on Fermentale originally to spread their message to the natives. Their culture promotes a life of chastity and peace. They are uncomfortable in this new found land of liberty. They are quite easy to spot in a tavern, they’ll be the ones tring to discourage people from drinking, and looking after those who have overindulged. They regularly make large charitable donations to the poor or sick.

“Let’s gar yam, thoo’s reet kaylied”  – (Translation “Let us depart to our abode. You’ve perhaps had too much to drink”)

Of course, when the colonists arrived on Fermentale there were already people there. The native culture of the island, the Buckan. When the strangers arrived, they were fascinated by some of the technology they brought with them. In turn, the Bukkan were experts at fermenting alcoholic beverages, and the colonists exported these methods back to the mainland, where they are now used worldwide. Originally scattered across the land, they Buckan have since created a stronghold in the north west corner of the island called ‘Wildborne’. Despite having widely taken on the Tulle culture, they still hold on to their proud traditions.

As with all the dev diaries, this is essentially me ‘Thinking out loud’. the game is still early in development, so the information may change. This is an open development, so anyone who wants to contribute ideas or suggestions, either comment below, or reach me at @StewHogarth on Twitter.